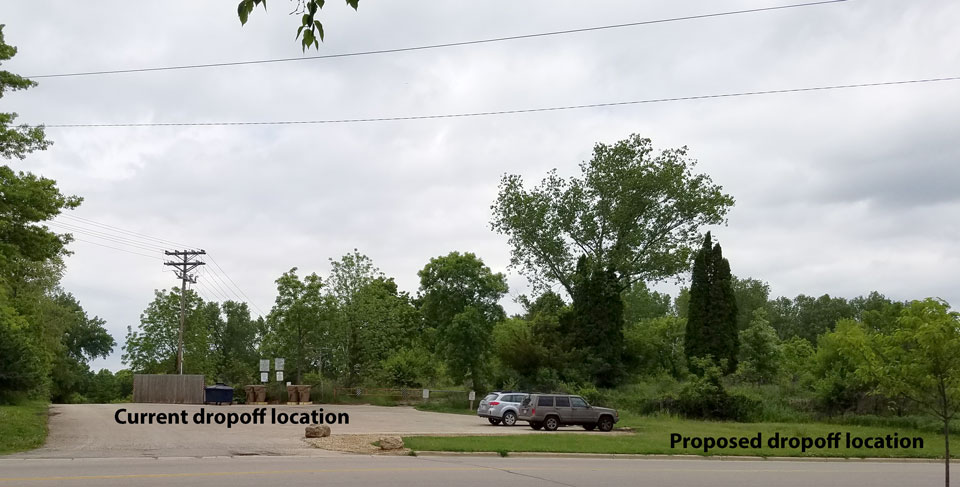 A need for improvements to the waste oil dropoff site has triggered a plan for changes to the entrance to Cherokee Marsh Conservation Park’s South Unit at the corner of Wheeler Rd and School Rd. City Engineering staff explained the changes at a neighborhood meeting on May 16.

The new design for the dropoff site will replace the current 1000-gallon tank with two 500-gallon tanks so the site can continue to operate if the contents of one tank become contaminated. (The tanks are tested once per week. The tests occasionally reveal PCB contamination, apparently from oil produced before PCB were banned in 1979.)

Obtaining a permit for this change requires improving other aspects of the site to meet current codes and also provides an opportunity to move the site away from the middle of the park’s entrance.

Most of the South Unit’s front parking area and some adjacent land is not park land but instead is road right of way that remains from when the intersection of School Rd and Wheeler Rd was reconfigured years ago. The dropoff tank was originally intended to be located within the right of way, but recent research revealed that the tank is mostly on park land.

The new plan is to move the dropoff site off park land and onto the right of way. The tank will likely be located along Wheeler Rd just east of the parking lot. The structure will be set back far enough to allow a sidewalk along Wheeler Rd if there is ever a desire to add one. The previous location of the tank will then be available for additional parking.

In a statement to the Engineering Division, the Friends stated that while we support waste oil recycling, the entrance to a conservation park is perhaps not the most desirable location for a dropoff site. However, Engineering staff wanted to keep the site at the South Unit in part because the public is used to using it there. We also suggested moving the shed to the other (west) side of the entrance road where existing vegetation could screen the structure from the road. 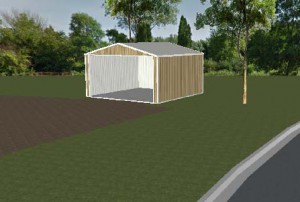 The waste oil tank and trash containers will be enclosed in an aluminum shed. (Image source: Madison Engineering Division)

The waste oil tank, four large city trash cans, a spill kit, and informational signs will be inside an 18 x 18 ft metal structure. The sides will be painted tan, and the roof will be forest green. The City will add plantings to screen the building from the road. The corners will have safety bollards (posts) to keep vehicles from accidentally backing into the structure. The structure will have solar lighting inside at night and the lighting will be visible from outside to show when someone is in the structure.

The site must be able to contain 125% of the tank’s capacity in case of a leak. To meet this requirement, at the back of the structure, there will be a 6 x 3 x 10 ft covered trough.