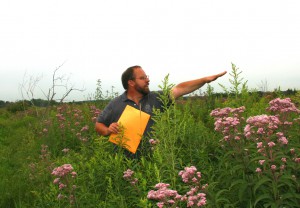 Russ shares his knowledge of wetlands on one of many tours he led (and continues to lead) at Cherokee Marsh. Photo by Janet Battista.

As Conservation Resource Supervisor for Madison Parks, Russ Hefty aggressively managed conservation areas. Recently retired from the post after 25 years, he can’t stop himself from continuing his dedicated work as a volunteer for the Wisconsin Department of Natural Resources at its Mt. Vernon property. He also plans to do some work at Donald Park near Mt. Vernon. And in January, he was elected to the board of the Friends of Cherokee Marsh.

Russ additionally has changed the “lollypop landscaping” around his recently purchased home by adding rain gardens and native plants to the quarter-acre site. Hiring a contractor to do much of the work, he also dug up a clay area and added sand to create a sand prairie.

“These are all native plants to attract birds, butterflies and pollinators,” he said. “A couple of neighbors have asked for advice on plantings. I enjoy in-person conservation and teaching people.”

He also organizes outings for the Madison Area Outdoor Group, a meet-up organization.

“I live four blocks from the Badger State Trail, so I can travel around by bike. That and gardening keep me out of trouble,” Russ said.

Russ’s interest in plant restoration began long ago and never wavered. By the time he graduated from Verona High School, he had decided on a major in horticulture with an emphasis on natural resources at the UWMadison. 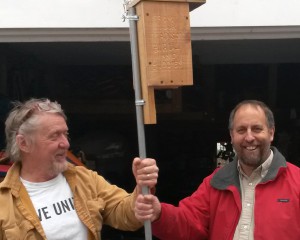 At 2015’s Bird City Celebration, Paul Noeldner (left)
recognized Russ on behalf of the Bird City partners for his
many achievements. (Photo by Barb Noeldner)

In the summers, he served as a Madison Audubon Society intern for prairie restorations at Goose Pond. After receiving a B.A. in 1980, he was hired by Si Widstrand as a seasonal conservation ranger for Madison Parks for three seasons. He became a conservation lead worker when another employee left, but later bumping by those with more seniority sent him to the Madison Water Utility as a water meter installer and then a laborer, jobs not nearly as enjoyable to Russ.

But Si was ultimately able to create a full-time conservation maintenance position that Russ filled. And when Si became Parks Planner, Russ became Conservation Resource Supervisor. Russ was hired in that position in 1991, and retired in January 2016 with the same title. He also was a caretaker at Owen Conservation Park for 22
years.

“We were able to be more focused and aggressive in land management of conservation areas,” Russ said. “We made good progress as we embraced the use of mechanical equipment,” he recalled. As more money was put in the Parks Department budget for this work, Russ was proud to be able to do habitat remediation in Cherokee Marsh.
Recently, he was able to create nesting places for redheaded
woodpeckers though a few people have criticized his use of lopped off trees to do so. However, Russ said the birding community was thrilled and he personally received no negative comments.

Another measure criticized by some park users was ripping up a popular wooden boardwalk in the North Unit of Cherokee Marsh Conservation Park. The boardwalk was ultimately replaced with two shorter and more easily maintained metal walkways while eliminating  the middle, connecting portion to protect existing and newly established wetland plants.

Russ also was proud to be able to close drainage ditches in an area of the Cherokee Marsh, to restore the natural hydrology by raising the water table. He regards that measure as closing up “a bunch of wounds.”

Additionally, periodic burns in the Cherokee conservation area also have helped to restore an oak savanna and keep it healthy.

In Cherokee Marsh Conservation Park’s South Unit, the city has put in two stormwater ponds and is planning another. “We got rid of invasive plants and stopped erosion and flooding in what had been a sand and gravel quarry,” he said. “Thousands of wetland plants were put in with the help of volunteers in an Earth Day project.”

Russ remains frustrated by high water levels in the Yahara Lakes, which he said led to erosion so that peat bogs broke off from the shoreline and floated away. “Sedge meadows were floating. That was not  normal.” He said. “From the mouth of the Yahara River to Cherokee,  records show that more than one square mile of wetland disappeared since 1850.”

Russ and his crews have established native plants to hold soil, but he says that lake levels must be lowered. “We need leadership from the university community so that we can experiment by lowering water  levels slightly in the summertime,” he said. “If we don’t do something,  more wetland will be lost.”