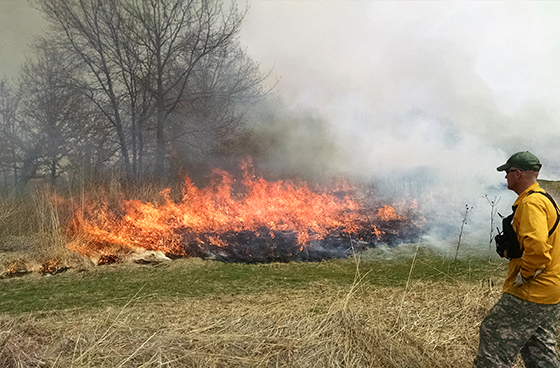 Without periodic burns, aggressive plants such as honeysuckle and buckthorn crowd out the native grasses, wildflowers, and other plants that provide food and shelter for wildlife and add much beauty to our natural areas.

Before European settlement, lightning sparked fires on the landscape, and evidence shows that Native Americans also set fires to maintain hunting grounds and travel routes. Many native plants have deep roots and other defenses to withstand fire.

The fires, called prescribed burns, are set in early spring and late fall to avoid interfering with nesting birds or emerging spring flowers. The burn crew includes certified wildland firefighters who are trained in burning techniques and safety. Burns occur only on days when the winds are in the desired direction—away from neighborhoods—and not too strong. Mowed or cleared paths and the Yahara River provide fire breaks.

Good weather and a trained crew make for successful burns

On burn day, the fire department is notified. The crew uses drip torches to light a line of fire while sentries stand watch and extinguish any flames that catch outside the target area. A crew member remains on site until all flames are out.

This spring, thanks to favorable weather and an increase in crew size due to cooperation with other City Parks units, the crew was able to burn almost 300 acres at the North and South units of Cherokee Marsh Conservation Park.

The weather cooperated in multiple ways. The Madison Fire Department allows prescribed burns only when the Department of Natural Resources rates the fire danger as low or moderate, and that was the case for most of the prime burn season of late March and April.

The weather made it possible for our staff to be able to burn larger areas, in excess of 50 acres, without extended mop-up. Two or three days of rainy weather each week maintained moisture in heavier woody fuels like fallen logs and standing dead trees. This prevented these large jackpots of fuel from catching on fire, while the finer fuels like grasses and leaves were still able to dry out and burn even when it had rained the day before.

We are required to extinguish all burning material before leaving the site, and this year, we left every burn before dark, which meant that we were available to burn the following day rather than returning to a site to continue mop-up.

These weather and fuel conditions also produced moderate intensity fires that spread well throughout the burn units, decreasing the time required to complete a burn.

Most importantly, we saw several days of south and east winds that blew smoke out over the marsh and river. Generally, we tried to refrain from burning under stronger west and north winds to avoid putting smoke into the neighboring residential areas.

The average size of the burn crew doubled this year thanks to assistance from staff from West, Central, and East Parks, Forestry, and new Parks Worker positions that are rotating through different sections at Parks. Paul Quinlan credits conservation technicians Brandon Mann and Jay Walters for an outstanding job training and integrating the less experienced staff that have been available to help.

Parks used the reverse-911 system to notify neighbors about planned burns. At one site, a young girl and her mother took the opportunity to set up camp on their deck on Wheeler Road to watch. Madison Parks Conservation Resource Supervisor Paul Quinlan reports, “that day, we arrived to find the mother and daughter already waiting for us to start. Pretty cool thing to do on spring break if you ask me.”